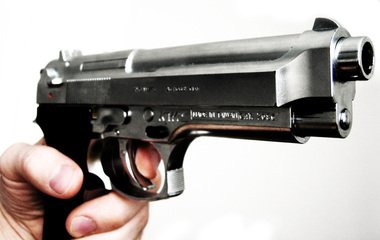 U: There have been two recent examples of the below course of actions that were very successful. See at the end of the article.

I wonder why authorities don’t give better instructions on what to do and how to act if they are involved in an active shooter situation. In nearly all (I think there is one exception) the shooting stopped as soon as a second gun arrives at the scene. In one case the shooter was killed by that gun but in most cases, the shooter commits suicide. Several years ago a man pulled a gun at a wedding being held in Temecula CA and started shooting. The men closest to him jumped on him and stopped the shooting before too much damage was done.

This may sound crazy, but the best response to an active shooter is to charge. The last thing the shooter wants is to be captured, thus, that’s why they commit suicide when the possibility of being captured or wounded and taken alive presents itself. At the infamous Vergina Tech shooting a lone gunman walked leisurely between rooms, even returning to some to kill the wounded. In one of those rooms, brave Air Force ROTC Cadet Matthew La Porte did charge and was promptly dispatched. Why? Because it takes more than one person. Usually. If everyone in each room (he entered and shot in several rooms) had the mindset that if a shooter enters their room, they will charge, there would have only been three to five persons shot. And some of those would have probably lived. That sounds bad but at Virginia Tech 32 persons died and 23 wounded.

It takes time for a shooter to fire at one person and then another. There is a good chance that the first person will block the shooter and the second one can reach the shooter. Then the third person and more can pounce on the shooter. Unless the shooter is several feet away, then it will take three or more bodies to block his aim until others arrive. Plus, use whatever is available. In the Virginia Tech instance, men and women could have picked up desks and hold them between them and the shooter as they charged. The desks won’t stop bullets but there is a very good chance the shooter will try to shoot around and thus, making him miss. Everyone else should yell as loud as possible. That will frustrate the shooter who may be trying to give orders, also, it has been shown that unexpected loud sounds can disorientate a shooter. Distance does play a part. If you charge someone more than ten feet away, and you are among the first one to five persons charging, things don’t look promising. In the Virginia Tech incident, he only had 15 bullets in his magazine. Worst-case scenario, 15 persons would have been shot. But again, most of them will survive with injuries. If there had been someone that could tell when the shooter’s gun is empty, it takes a few seconds to reload, and that would be a good time to charge.

The shooter entered and exited the same rooms multiple times. What happens when a gunman enters the room? His gun and hand enter first. Someone hiding at the door jam could just reach out and grab it as he stuck it through the door opening. That would have been completely unexpected and would frustrate the shooter. When all else fails and you can’t escape or hide, try playing dead. It has worked for several persons. Are Americans brave enough to make such an ad hoc action?

In nearly all active shooter incidents the incident ends when the second gun gets there. It forces the shooter to commit suicide or risk being wounded and taken prisoner. The one thing almost all shooters fear is having their face plastered all over the newspapers and TV.

Yes, look at the 9/11 plane hijackings. One glaring element that everyone has missed is, that the terrorist’s elaborate plan only worked for an hour and seventeen minutes. The first plane crashed into the World Trade Center at 8:46 am. By 10:03 am the plan fell apart and the brave passengers of United Flt 93 tried to take back their plane. From that time on a takeover would not work. Enlighted Americans would have pounced immediately. Americans as a society are very brave.

Hostage situations: If you can escape, escape. In one instant a teenaged girl didn’t want to leave her best friend behind, so, she returned and was killed. Her friend was left for dead but lived. Had the first girl escaped odds are that both would have survived. In a hostage situation, the best way to handle it is for a witness to escape. The hostage taker is much less likely to kill or otherwise harm the remaining hostage when there is a good chance of prosecution if caught. In several police departments it is taught that if someone attempts to take an officer hostage or kidnap the officer, the officer is to resist. Pull their gun and fight it out. History has shown that police officers do not fare well when someone is able to get them to an isolated place. They are killed and the suspect has the time to make sure the officer is dead, no playing dead here. And when officers pull their guns, even when the suspect has their gun pointed at the officer, the officer does much better. No one wants to kidnap a wounded officer. Too much trouble. And if the officer is shot and not able to resist, then play dead. Officers in these situations often survive their wound, when kidnapped not so much.

In Salt Lake City a man took an entire maternity ward hostage along with several newborns. He had several guns and had a bomb out in his truck. He took two hostages, nurses, out to get it. He told everyone that he was going to blow up the entire ward and all the babies with it. When outside one brave nurse tried to grab his gun, but, when that failed she tried to escape and was shot in the back and promptly died. Had the second nurse taken her cue and also attacked the man they probably would have been able to get the gun away. The two went back onto the ward without the bomb. The hostages included a woman in labor and her boyfriend. The man told the boyfriend to go outside and retrieve the bomb which was now in the bushes just outside the door. When he exited the building police ordered him not to go back inside. He yelled that his girlfriend was inside and he had to return. He picked up the bomb and took it to the man, thus, endangering many more persons that were being held, hostage. It was, in fact, a very real and powerful bomb.

What should the boyfriend do? For one, if he didn’t want to abandon his girlfriend he should have refused to go outside and face the consequences. By doing the cowardly thing, the “touchy feely” thing, he endangered the entire ward with its ten or so hostages plus others that had not been evacuated. The man did not make demands that once met would result in the release of everyone. He made demands and stated he was going to kill everyone even if the demands were met. Once outside he should have stayed out, but again, if he didn’t want to abandon his girlfriend he should have returned without the bomb. The hostage-taker eventually gave up even though the police had refused all of his demands. This was probably the same outcome had the boyfriend also refused to do his bidding. We will never know, but, we do know that several additional persons were put at risk. Keep in mind that the hostage taker had already said he was going to blow up the ward which included his girlfriend and the boyfriend, so, nothing was gained by the bomb being taken inside, quite the opposite. The hostage taker would have been denied one additional threat for the negotiations.

If someone is trying to beat or choke you to death, die. At least play dead. If someone wants you dead give them what they want. This has happened several times. Most murderers don’t realize how hard it is to kill someone and they become satisfied that the deed is done well before it is and stops.

Recent Examples: On April 27, 2019, in Poway California and then again on April 30, 2019, at the University of North Carolina at there were two active shooters.

In the CA instant, a shooter entered a synagogue and started shooting. A brave woman placed herself between the gunman and his intended target, the rabbi, disrupting his attack. Others then pressed an attack and chased the suspect away. One of those persons actually took a shot at him. The shooter quickly gave himself up to the police when they gave chase. As it turns out, the shooter’s gun jammed. Why it jammed we don’t know. It could be that the disruption by the woman caused him to unintentionally do something to the rifle, but what we do know, is that he was denied the pause he needed so he could put all his attention on the weapon so he could troubleshoot and clear the jam. Three others were wounded but survived. Had this action not been taken many more would have died. In another recent shooting at a synagogue, eleven persons were killed.

In the UNC shooting, it was another ROTC cadet who pressed the attack when a gunman entered and began shooting. He was able to knock the gunman down while others jumped on him and took him into custody. The cadet and one other died of their wounds. Four others were wounded, two severely, but as of this report all four have survived.

It’s impossible to measure how many lives were saved by these brave people. One thing we do know, there weren’t thirty persons killed; at each location.

119 Replies to “Hostage-Active Shooter How to survive”